—1859—
How to Enrich the Farms and
Farmers of New England

Enriching the farm enriches the farmer, and the foundation of it all is manure. The use of manure is a condition indispensable to the existence of New England farming. It may be made on the farm, or it may be in a concentrated form, like guano, superphosphate and sulphate of lime, ground bones, or the other articles sold as fertilizers in the market, many of which are no better than they should be; but there must be manure of some kind, or the crop will rarely pay the labor.The farm is the place of all others to make manure, and the farmer has no security against fraud and imposition on the part of the manufacturer of an artificial manure; for however good a sample may turn out, a worthless imitation may be sold under the same name the next season, and the money paid for it thrown away. The general rule of the farm should be to buy as little and sell as much as is consistent with judicious management; and buying concentrated manure, as long as there exists a possibility of making a sufficient amount of equally fertilizing substances on the farm itself, is no way to enrich the farm or the farmer. Why not spend a little extra money and labor in saving with scrupulous care, all the liquid manures of the stables and buildings, and applying them either in a liquid form or in the form of a compost?A barn-cellar is thought essential for the protection of volatile manures, but covered sheds answer very well, and some say better; and if peat mud, loam, street scrapings, and leaves after being used as bedding, are often mixed with the manure-heap, or placed where they can receive and retain the flowage from the stalls, they become valuable fertilizers, especially for lightish lands. But if, after every exertion to make and save the greatest amount on the farm, still more is needed, the best Peruvian guano, from a reliable source, is, on the whole, the cheapest, since its effects are well known, and the cost of transportation and application is but trifling compared with the coarser manures.The idea should be kept prominent in the farmer’s mind, that it is better to manure well and heavily, so far as he goes, and thus constantly improve the condition of the land, which will, in turn, feed more stock, and this again will furnish more manure to aid in bringing up other parts of the farm. Let him not attempt to cultivate more than can be done well, taking one piece after another, and leaving each in higher condition than when it was taken up.Economy of manure, and the large amount of fertilizing matter which can be made by proper care in saving all liquid and other manures, is the chief reason, with many, for soiling their cows, or feeding out green fodder in the barn during the summer, instead of pasturing. The profit of this system depends much on the relative cost of labor and land. Where labor is cheap and land dear it is economical. Where land is cheap and labor dear it cannot be done with profit, unless there is a deficiency of manure on the farm, in which case it is cheaper to make it by a judicious system of soiling than to buy artificial manures, with the risks of imposition.If the amount spent in New England for foreign fertilizers had been spent in extra care and keeping for dairy and other stock, with special reference to the largest quantity of the best manure and the largest yield of dairy products, it would probably have given more lasting and satisfactory result, and our farms and farmers would have been richer. To carry this system out properly, much forethought is needed to save the labor of transportation, by having the crops designed for green feed near the barn, and a good succession of them, as winter rye, followed by corn fodder or turnips, or both, making two or three crops from the same land, with clover and some of the luxuriant grasses, as June grass, the Meadow Foxtail, and the Orchard grass.Care, system, regularity, and forethought, are the fundamental points of success in farming. With them, farming is safe, profitable, honorable, and healthy; without them, success in any calling is not to be expected. The best investment the farmer can make is on the farm itself; in permanent improvements, which will pay a fair per centage in increased crops, in the rise in value of the land of the whole farm, and in the improved condition and comfort of himself and family. The use of some capital is required in farming, but so it is in other kinds of business, where the profits are no greater when the comparative risks are considered.Bear this in mind, then, that improvements must begin with an increased quantity and an improved quality of manure. The special object of pursuit, whether it be the raising of stock, grass and hay, united with dairy produce, or vegetables, the various kinds of fruit, or some other salable article will be governed much by the location of the farm and the distance from market.
[Thomas’s] 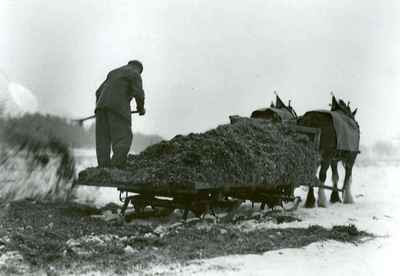 ###
Over on the sidebar I have posted a quote from Wendell Berry that says, in part, "Perhaps they disliked paying cash for energy and fertility that they had previously received in kind from their farms and their good work." In the Agrarian Nation, the energy for farming came from animals, and so did most of the fertility.
.
When the tractors came, they did not produce fertilizer for the farm, and farmers became more dependent on the industrial system. With that thought in mind I recommend to you How Farmers Became Slaves to the Corporate Masters, which is based on a story by Walter Prescott Webb, official historian of this Agrarian Nation web site. Read it and weep.
###
The next installment of Agrarian Nation will feature an essay from the 1859 Thomas's farmer's Almanac titled, Hints and Directions for Destroying Insects Injurious to the Farm and Garden. But that's not all.....

I will also provide you with a Bonus Excerpt in which you will learn a clever but remarkably devious and bizarre technique from the old timers To Prevent Birds Pulling Corn.

Thank you for creating this much needed information! I hear of agrarian books of old that I would love to get my hands on, but that takes time and building our farm takes presidents.
I have a farm blog also that talks of our farming adventures. Please take a look when you get a moment.thefarmettafarm.wordspot.com