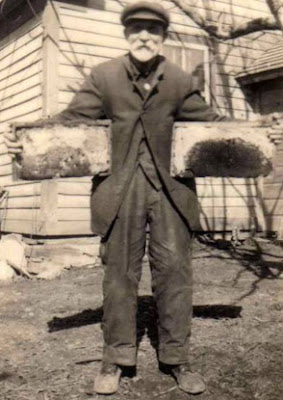 -1833-
Bees
Watch your bees for it is about time to look out for swarms. This useful insect meets with less attention from us farmers, than it merits. Bees cost almost nothing at all, but a little care and a few hives, which almost any farmer can make. Some believe, and apparently on good grounds, that a garret, or any other unoccupied dark room will answer every purpose of a bee house; and Dr. Smith asserts, that bees in a garret, “with so much room before them and a few small orifices through which they may get into the open air, never would swarm until the whole garret was completely stored with comb.” But in order that you may manage your bees to the best advantage, you had better procure a little treatise on bees, written by Dr. Thatcher and Dr. Smith, which may be had of any of the booksellers.
[Maine] 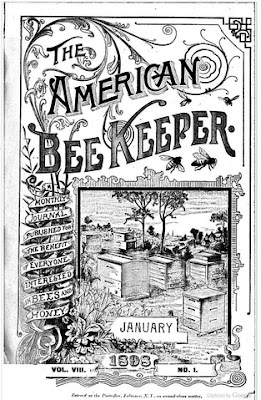 -1865-
To Catch a Bee Swarm
The Rev. Thomas P. Hunt, of Wyoming, Penn., has devised an amusing plan by which he says that he can at all times prevent a swarm of bees from leaving his premises. Before his stocks swarm, he collects a number of dead bees, and, stringing them with a needle and thread, as worms are strung for catching eels, he makes of them a ball about the size of an egg, leaving a few strands loose. By carrying—fastened to a pole—this bee-bob about his apiary, when the bees are swarming, or by placing it in some central position, he invariably secures every swarm. Almost all the bees in a swarm are in a very peaceable mood, having filled themselves with honey before leaving the parent stock.
[Maine]
-1867-
Chloroform For Bees
Chloroform has been applied, instead of sulphur, to bees. A correspondent in the Edinburg Evening Courant has adopted this plan successfully. The quantity of chloroform required for an ordinary hive is the sixth part of an ounce; a very large hive may take nearly a quarter of an ounce. His mode of operation he describes as follows:
I place a table opposite to and about four feet distant from the hive; on the table I spread a thick linen cloth, in the centre of the table I place a small, shallow breakfast plate, which I cover with a piece of wire gauze, to prevent the bees from coming in immediate contact with the chloroform. I now quickly and cautiously lift the hive from the board on which it is standing, set it down on the top of the table, keeping the plate in the centre, cover the hive closely up with cloths, and in twenty minutes or so, the bees are not only sound asleep, but contrary to what I have seen when they are suffocated with sulphur, not one is left among the combs; the whole of them are lying helpless on the table. You now remove what honey you think fit, replace the hive in its old stand, and the bees, as they recover, will return to their home. A bright, calm, sunny day is the best; and you should commence your operations in the morning before many bees are abroad.
[Leavitt’s]

-1880-
Adulterated Honey
We had thought that there might be some articles of domestic consumption that would escape adulteration. But in view of recent developments we are inclined to believe that the ingenuity of man is unlimited in this direction. Prof. A. J. Cook, of the Michigan Agricultural College, an acknowledged leader in all that relates to agricultural interests, has dispelled the pleasing delusion that honey in the comb, evidently put there by the busy bee themselves, and covered by their skill, is certain to be pure.

He shows plainly that it is the practice in some quarters to feed the insects on glucose, which they store like the genuine honey, and cover in the same way. This disreputable practice has already been carried so far as to seriously injure our reputation abroad, and injuriously affect our foreign markets.

The British authorities at Liverpool, not long since, seized a large cargo of comb honey shipped from new York, on account of adulteration. This glucose is an inferior sort of sugar made from starch through the agency of sulphuric acid, and liable to be contaminated with poisonous substances.

Commercial sulphuric acid usually contains arsenic, lead, and other mineral poisons, and, that these may be left in the glucose has been sufficiently proved by chemical analysis. Glucose has for a long time been used to considerable extent in adultering cane sugars, and much of the sugar we use in our families  will be found, on examination to contain it in larger or smaller quantities. When the consumers inquire more carefully into the character of the articles purchased, and insist upon purity rather than cheapness, these rascalities will cease. The remedy lies with the people.
[Maine]

I find it most interesting that the nascent industrial food system in this country was adulterating food as far back as 1880. Contrary to the almanac editor's assertion, such "rascalities" did not cease. They just got worse. Nowadays practically every food offered by the industrial food outlets (supermarkets) is adulterated in some manner.
Speaking of which, in a future excerpt here you'll learn about the introduction of oleomargarine and the adulteration of butter in the latter 1800s. That was a big deal at the time.
###

For those who don't know, it was once common for beekeepers to harvest honey from their hives by first gassing the bee colony with sulphur. This killed all the bees.
In 1852 L.L. Langstroth, a Congregational minister in Pennsylvania, developed the hive style that is commonly known today. It allows frames of honey to be removed and harvested without destroying the hive. You can read a pretty good article about the history of beekeeping in America At This Link.
###
==========
If you appreciate  Agrarian Nation, please consider supporting this web site with a modest donation.  Click Here For Details
==========

He said "the remedy lies with the people". I would say that the same is true today. Every time we opt to purchase food from the "cheaper" stores than from a local organic farmer whose food is "more expensive" we are all brought one step closer to not having any food choices.

I agree. Or grow it yourself.