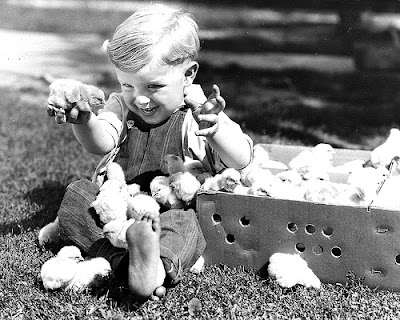 Today's excerpt comes not from an old almanac but from the 1887 Seed-Time and Harvest magazine (pictured below). The publication describes itself as: For Every One Who Plants A Seed or Tills A Plant. I like that.
The first two pages of his particular issue have a section titled, Our Scrap Book, and this explanation:

Under this head we propose to give choice selections in verse which we think worthy of preservation, either for their elocutionary or true poetic merits, or oddity. Contributions are solicited. We will print or return all we receive, so choice pieces may be sent without fear of loss.

It is not clear if the magazine editor considered today's excerpt to be a poem of  true merit, or an oddity. As far as I'm concerned, it's both.

That poem is so true. I don't think our hens can count. They never seem to miss the ones that disappear.

What is a Roup ??? I guess the family dog ..... Or maybe it is the real name of Mr. Raccoon who has eaten 14 of my chickens 2 rabbits and 3 ducks this summer after 9 years of barely loosing any,Mr Roup is in the coop!!

Roup is probably croup, a respiratory illness that children are prone to getting, but I understand there is a chicken version.

Sorry to hear of your losses. I know from similar experiences in the past how discouraging that can be.

This poem reminds me of a nursery rhyme my wife sings to our little boy. Every time I hear her singing it, I question whether or not she really should be... all though I know he doesn't understand yet. It goes like this:

5 little ducks went out to play,
over the hills and far away.
Mama duck said "Quack, quack, quack",
and 4 little ducks came running back.
(Repeat, with 4/3, etc...)

She says that there is a happy verse at the end once all the ducks are gone, where the mama duck goes out with no little ducks and then all 5 come running back... but she doesn't know how that verse goes!

Great post, and I love the picture of the little boy and the chicks. Just exactly how I yearn and desire for my son to grow up.

Yikes, that was pretty gruesome! It goes to show how vulnerable our poor chickens are. We've had a possum lurking around the coop at night, but my dog has been keeping it at bay, so far.

If you live in Texas you have to add Mr. Rat Snake. I bought a dozen chicks and a dozen guinea hens and had them in a large wooden box. I forget and left off the top of the waterer which is made of pvc pipe. Next morning I found a rat snake in the water pipe and had five guinea hens and three chicks left. The snake met his demise with some rat shot in my 22.

Texas and Rat snakes. I wrote about my experience earlier this year
http://blog.mcmurrayhatchery.com/2011/05/31/snakes-in-the-coop/

JoeProgrammer— Those were quite the snakes! Here is a hot link to your blog story:

Snakes In The Coop