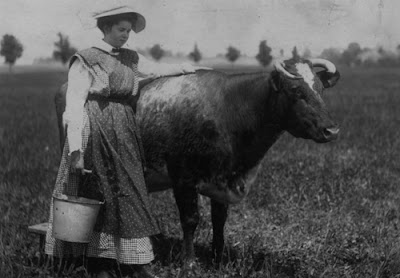 No matter what breed you have, something is necessary to reach the highest success in raising good  milkers. It’s a great thing, to be sure, to have good blood, whether it be Ayrshire, Jersey, or Short-horn grades, but apart from this important advantage, the course of treatment in raising a milker is somewhat different from that in raising a beef animal, or animal for labor.
The calf should be well fed and petted while young. Well fed, to induce a rapid growth, so as to enable the heifer to come in early; petted, to make her gentle and fond of the presence of her keepers. Fondling helps to create a quiet disposition, so important in the dairy cow, and this education must begin when young. For a milker, we would have the heifer come in at two years old, and if she has been well kept, so as to have attained a good size, she is then old enough to become a cow. She will give more milk for coming in early. It forms the habit of giving milk, and habit, you know is sort of a second nature. An older bull is better. We use too many young bulls. A three or four year old is far better as a stock-getter than a yearling, and many prefer a five or six year old to any other. After the heifer has come in, let her feed be regular. Clover is preferred to all others for the stall feed. A little oatmeal induces a large flow. Indian meal is rather fattening. In bad weather, give her a clean, airy stall.
[Thomas’s Farmer's Almanac]

My wife and I spent a day at Sturbridge Village last week and I took the picture above. Inside the barn is an educational display and a sign with the following information about dairying in the Agrarian Nation...


Up through the middle of the 19th century, dairying on New England farms was women’s work. Boys might help with the milking, but farm girls learned the “art and mystery” of butter and cheese-making from their mothers. The dairy was a crucial part of every farm’s economy, and it became ever more important as New Englanders gave up growing grain to concentrate on butter and cheese.

On the majority of farms, the dairy produced most of the surplus that could be traded for goods or turned into cash. Salem Towne Jr., whose house is just next door, was a farmer and businessman who frequently traveled. He wrote his wife Sally letters with instructions about the farm’s workers, field crops, and livestock—but he never mentioned the dairy, which was busy producing butter and cheese. That was Sally’s domain, and he left its management to her.

It's too bad those feedings and supplements are then passed on the consumers, most too small to have a say in what they eat.

I find the above farm fact very interesting because if one pays attention to the excerpt we can see that way back in 1867 these same practices were already taking place. Specialized Breeding: they wanted an older bull this was most likely because they wanted to know how well his progeny were milking if they were all milking poorly I bet that bull getting fattened ;). Feeding: clearly they were well aware of what made a cow milk better "A little oatmeal induces a large flow" and to this day clover makes incredible forage for cows. Supplements: OK so maybe they weren't using supplements at this time. However, I dare say that if the technology had existed to determine that what they were feeding was short in some mineral and that by supplementing it they knew that it would make for a healthier cow they probably would have been using supplements. Ultimately a cow is going to make milk, it's going to contain a percentage of fat, protein, and solids. Irregardless of what those percentages may be in our bulk tank what you get in the store had been through a standardizing process at the milk plant that it is shipped to. What is left over after this standardization is then used to make butter and cheese. We dairymen do our utmost to produce the highest quality most wholesome product that we can. If you don't like what ends up in the store you need to complain about the processing and the processor not us the producers.