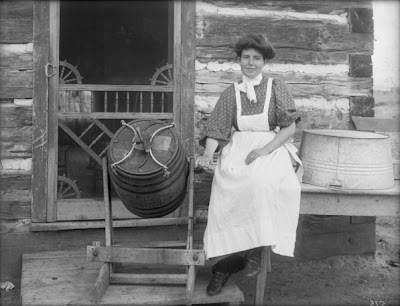 There is a good deal of excitement at present in regard to the alleged adulteration of butter. It is said that  the adulteration of  natural butter by various intermixes of lard oil, tallow oil, and other foreign ingredients, has been practiced to such an extent that in some States the spurious product has found its way into almost every town and city, and is nearly equal in quantity to the entire production of natural butter. It is said also that these fraudulent imitations cannot ordinarily be distinguished from natural butter by the purchaser, and even may baffle the scrutiny of experts. To test the extent of the traffic, thirty samples were purchased at random in the markets of two large cities, all being sold as pure butter. A chemical analysis showed that twenty out of the number were oleomargarine, most of them with hardly a trace of pure butter in them. We are inclined to think that the moral sense of the community averages as high now as at any previous time in the world’s history, but the progress of science aids the rascal and the honest man alike. The same advance in chemical knowledge that furnishes us with our beautiful aniline colors, by utilizing an almost worthless product, equally enables the cheat to palm off his oleomargarine as the purest of dairy butter.
[Maine Farmer's Almanac] 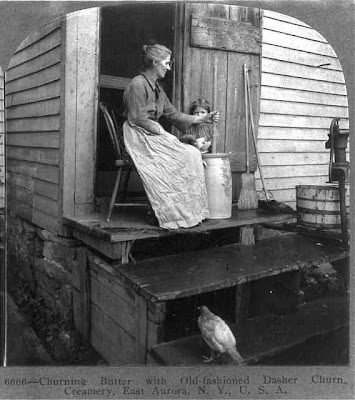 ###
It was surprising to me to learn that artificial butter was around in 1885. Turns out it was actually invented by a French chemist is 1870. You can read some oleomargarine history at This Link
###
In Chapter one of my book, Writings of a Deliberate Agrarian

, I write about "The Breakfast of Agrarians" and, after noting that there are now egg substitutes, I make the statement:

It is remarkable, really, the myriad ways the industrial providers can morph natural food into something unnatural or—worse yet—a synthesized copy. This fare of the industrial providers is food foolishness. These people, these companies, these forces, exalt their fake products, boldly proclaiming that their creations are better than the unadulterated bounty created and provided by the sovereign God of all creation. What gall!

That pretty much sums up my opinion of oleo, which America now consumes bazillions of tons of every year—but you won't find it in my house.
###
Most farm wives in the late 1800s and early 1900s churned butter and sold it to the the local grocer. My great, great grandmother Josephine Jordan, up in northern Maine did this. She also sold eggs to the grocer. It was a steady source of income.
You certainly don't see that sort of thing done today. There are hardly any small farms and farm wives left, and the small-town grocers are gone too. Besides that, I suspect that making and selling butter from your own cow is a criminal activity. Woe to anyone who dares to do something like that. A well-armed swat team would probably swarm into the home and shut down the operation. What was once good is now bad. We've come a long way....
==========
If you appreciate  Agrarian Nation, please consider supporting this web site
with a modest donation of $4.95 a year.
Click Here For Details
==========

Email ThisBlogThis!Share to TwitterShare to FacebookShare to Pinterest
Labels: oleomargarine

As we recently acquired our very own house cow, and I have been making beautiful fresh butter, I love this post and totally agree with you. Just because new technology makes something possible, doesn't mean its a good idea. If I could make a living from selling our fresh raw butter I would quit my job today!

Amazingly, this article reads very similarly to this article (http://www.chengduliving.com/fake-eggs-are-no-joke/) from current news.
As industrialization takes over China, butter and eggs are the first to go.
How disgusting!
J

I'd love to be a farm wife, but I can't seem to find a farm husband, lol.

Also, when the government is held in the hands of big corporations, naturally they will change laws to benefit themselves, in the name of "your safety."

I despise margarine, and wish that I had the land to have a milk cow of my very own. Since I don't, I have to settle for purchasing my butter from the store. I'd much rather buy butter from a farmer's wife, but none of the farms around me actually have dairy cows.

Although I grew up mostly eating margarine I've only bought real butter since I left home. However it was store bought butter all these years until a year or so ago I found a local dairy which sells grassfed dairy products. They are pasteurized unfortunately, but there is no way to get around that with the current laws. At least it is grassfed and produced by a small local place.
I get raw milk through a cow share but I can't get cream or butter or anything else that way so this place is the next best thing.
According to the Nourishing Traditions book studies show that people who eat grassfed butter have less heart disease than people who eat margarine, and it's no wonder. One of the problems with the health advise given now adays is that even much of the supposedly natural food sold at the store is produced and/or processed in such a way to make it bad for you. Such as in the case of homogenized and pasteurized dairy products. Milk in its natural form is one of the healthiest things you can eat, but by the time they feed the cows grain and soy and process the dairy to make it legal to sell at the store it is turned into something no one should consume.
Thanks as always for your interesting blog posts!

I prefer butter, too. But butter is something that requires human intervention and manipulation of the milk to create. It doesn't come out of the cow that way. So I wonder why you consider butter god's gift while condemning another manmade product, margarine, the invention of the devil?