Pumpkins, probably, are nearly, if not quite, as valuable as the same weight of most kinds of roots, for the purpose of feeding Milch-cows, and fattening cattle; and as they are easily raised, and still easier gathered, it would seem that raising, even the common kinds, might be made profitable.

In raising a crop, the hills should probably stand about seven feet apart; and, though the crop would require as much ploughing as other hoed crops, yet the expense of hoeing would be but trifling. The crop would not be so expensive to raise, and gather, as a crop of Indian corn; it would exhaust the soil but little, and it would be a fine preparative for wheat, as the ground could be cleared of the crop sufficiently early for sowing that grain.

It is believed that an acre, properly cultivated, would yield as much as ten tons of even the common kind of pumpkin; and that these would be found worth as much as sixteen cents per hundred, for the purpose of feeding and fattening cattle. The ground should be broken up in the latter end of the preceding autumn; and cross-ploughed just before planting the crop, which should be planted early.
[Maine Farmer's Almanac] 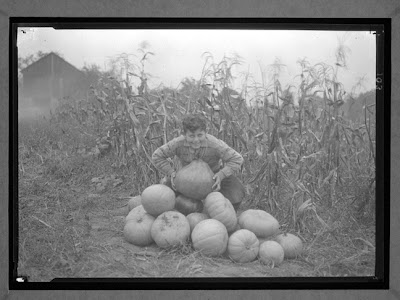 Pumpkins are a native American vegetable (or would they actually be a fruit?). To the modern mind, pumpkins are primarily a decoration or a seasonal novelty, but in the Agrarian Nation, they were an important source of food for cattle, hogs and people.

We like pumpkin pies, and the old-timers did too, but "pompkin porridge" was a mainstay on many early farmsteads.

In my family we process pumpkins into a puree that my wife uses to make a pumpkin pudding, which is really good (It might be very similar to pompkin porridge). You can read about how we process the pumpkins and get the pudding recipe at This Blog Post.

###
A few years ago I went to a steam show near my home (I wrote about it HERE) and discovered the unusual tool pictured below at a flea market. The vendor told me it was a pumpkin chopper, used to chop pumpkins before feeding to cattle and hogs.
###
On a subsistence farmstead, when harvesting was done by hand, it was a common practice to plant corn, beans and pumpkins together in a field. This was an Indian custom that the settlers adopted. This excerpt from the book, A Long Deep Furrow, explains....

On old land the best culture practice was to plow, crossplow, harrow smooth, then furrow and crossfurrow at intervals from 3 to 4-1/2 feet according to the quality of soil, and plant at the intersections. After the corn plants came up, light furrows plowed lengthwise between the rows threw the earth toward the hill, followed by hoeing to kill or cover weeds. After these first cultivations the hoe was used once, sometimes twice, according to need. Bean vines twined up the cornstalks, and pumpkin seeds planted at intervals provided foliage to cover the ground for the final weeks, smother weeds, and produce welcome additional food.

When the corn was planted at intersections of the crossfurrow grid, more than one seed was planted. And when it speaks of throwing earth toward the hill, it is not speaking of a raised portion of ground. "Hill" was a place where more than a single seed was planted. It need not have been raised, though it often became a raised spot as soil was hoed up around the growing plant. See this old definition.

Hi there, loved coming across these old photos of pumpkins. The one with the man and his two girls on the pumpkin is of William Warnock with a 403lb pumpkin he took to the St Louis World Fair in 1904.

He held the world record with that pumpkin for 72 years.

Where did you get the old photos from?

Thanks for the information. I got the pictures from a Google images search.