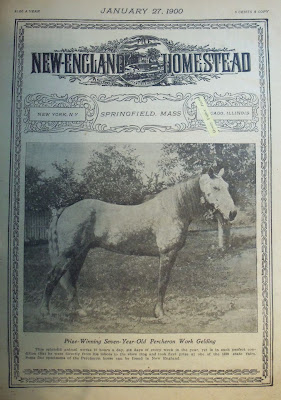 The following excerpt was gleaned from the January 27, 1900 issue of The New England Homestead (pictured above). That date is 27 days beyond the 19th century, but I reckon it's close enough for our purposes here. This particular excerpt was sent to the magazine by Marion M'Conkey (no address was given).
###
Money Making at Home
From Garden Produce
I sold $300 worth of produce last year. I had many difficulties to contend with, as I am a farmer's wife with six little ones, all under 19 years of age, and had to hire a young girl to stay with them while I went to the city three miles distant.
I sell mostly at hotels, boarding houses, restaurants and lunch rooms, with just a few private houses. Sometimes when I have more than I can sell I trade them to the carpet weaver for rag carpets. And I bought five that way, which when sold brought $35.
My account book shows: Vegetables $50, butter and pickles $50, miscellaneous $100.
In the spring I sold milk, lettuce, onions, rhubarb, eggs, asparagus, mushrooms, butter and broilers I hatched in an incubator at 16 cents per pound. I also sold early in May choice garden and flower plants, celery, cauliflower and mango plants and double petunia and fancy pinks and pansies. In early summer I sold bushels of beans, peas and tomatoes, gallons of small fruits and 10 bu of early green cooking apples. I sold a large amount of sweet  milk for ice cream and a great deal of buttermilk. Often I would make two trips a day, with special orders. In fall I disposed of the surplus apples that were very cheap by having them made into butter, 40 gallons of which I sold at 50 cents per gallon. In the fall I made kraut and mixed pickles, besides a large amount of ketchup which brought good prices. Jellies, cider, beets, grapes, butter, plums, field corn on ear, for pickling and various other things I cannot remember. In the winter I made mincemeat, head cheese, sausage, besides selling ribs and backbones occasionally.
I sold 500 gal. lye hominy, making it in 10 gal lots, for which I receive 20 cents per gal. I gave good measure, and neatness and cleanliness are the most essential points. I enjoy the business as it gives me a few hour's freedom from the monotony of farm life and the extra pin money was not the least factor of the business. One need go to town but once each week, and by having the things engaged do nicely, and so many fruits and vegetables go to waste on the farm that could be turned into honest pennies to replenish the usually flat pocketbook (if she has one) of the farmer's wife.
###
What? No sweet potatoes? Well, I guess Mrs. M'Conkey has a good excuse.... she wasn't able to read my recently-published Deliberate Agrarian Special Report, Growing Sweet Potatoes in My Northern Garden.


###
For some perspective on the remarkably productive and inspiring Mrs. M'Conkey's income, I checked with an online inflation calculator.... $300 in 1899 is equivalent to around $8,000 in today's dollars.

There are some other similar excerpts in this money-making section of New England Homestead magazine. If you would like, I'll be glad to post them in future installments here.


Oh, one more thing... I don't suppose Mrs. M'Conkey did this all on her own. It's a sure bet those six young'uns had a hand in helping their mother, and probably to some degree Mr. M'Conkey too. Thus we have ourselves a perfect example from the Agrarian Nation of a diversified home economy.
.
###
==========
If you appreciate  Agrarian Nation, please consider supporting this web site with a modest donation of $4.95 a year.  Click Here For Details
==========

Always interested in how one can make money from a garden. Yes, she may have had help from the Young'uns, but they didn't have TV back then so it was easier to get cooperation. And young children really do like to feel like they can contribute if you let them.

Very encouraging! I would love to read more from the magazine.
So many are looking for ways to make money as a family from the farm. A great example of this is in the movie, "A Journey Home".

Yep!! I would like to read more, I am about to begin a road side stand next summer and hope it will pay for my gardening obsession. I should aim higher. My neighbors children earn $500. a year selling pumpkins at the road . Mrs M' is an inspiration!!

I would enjoy reading more "tips" from the past :). I'd also like to know how Mrs. M managed her household and child rearing. Enjoying your blog! Jennifer in western NC

Yes, please, more excerpts! Things like this inspire me to be industrious -- and make me feel less stressed about my current workload, in comparison to that of someone like Mrs. M'Conkey!

Please give us more of this good woman's wisdom and self-sufficiency! She certainly is inspiring, and I'd enjoy knowing more of how she managed so much. Keep up the good work with this blog. We've learned so much, and reading of how things were done "back then," as my daughter calls it, helps me keep our daily lives and our desire for simpler things in perspective. They did, and so can we.