Today I present to you four short excerpts from the book, American Yesterday, by Eric Sloane, first published in 1956.
For those of you who don't already know, Eric Sloane was an artist who authored and illustrated numerous books, most of which were about the American Agrarian Nation. As you might guess, I'm a big fan of this man's work, and have been since my teen years. I suspect that what I learned from Eric Sloane's books helped to shape and sharpen my early agrarian understandings, which have eventually led to the creation of this web site.
###
It takes a thousand men to get a load of fuel oil from the raw material to your furnace and probably as many to deliver a load of coal. It takes only one man, however, to make a pile of cordwood. Unlike a mess of oil or a heap of coal, a stack of wood is a living and a gladdening thing to behold. It has long been the symbol of the double benefits of farm life, warming you twice—once when you cut it, another when you burn it. Actually there is a third warming which is hard to define; an old almanac says, ‘City homes are warmed by coal, but country hearths do warm the soul.’
Whether you were a banker or shoemaker in colonial times, you were always at the same time a farmer; whether your home was large or small, it was also a farmstead. Even princes and poets of the eighteenth century were ardent agriculturists or posed as farmers and rural philosophers. Not having a rural background and a farming philosophy in those times was perhaps as bad as not being a church member. 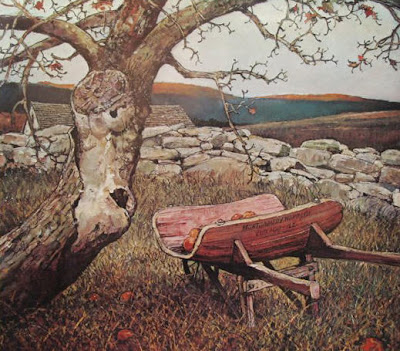 We think of George Washington as being a “gentleman farmer,” which now describes a hobbyist, but Mount Vernon followed the tradition of all homes of that time. The General had the exact knowledge of farming that every American enjoyed as part of his daily life. How strange and foreign to modern living is a notation from the diary of John Adams: “Rose at sunrise, unpitched a load of hay and translated two more ‘Leaves of Justinian.’” 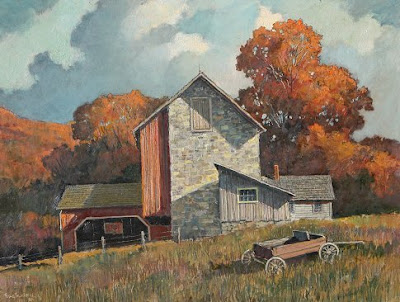 Farming now is an occupational pursuit. Farmers raise stock to sell, but two centuries ago they farmed almost entirely for themselves. Instead of a pursuit, farming was then a way of life. The philosophy of farming, which was once a recognized American principle, was based on three beliefs.
1. That agriculture is the fundamental employment of man upon which all other economic activities are vitally dependent.
2. That the farmer enjoys economic independence.
3. That farm life is the natural life and, being natural, is therefore good (This belief implies that [a] completely [urban or metropolitan] life is necessarily a corrupt one). 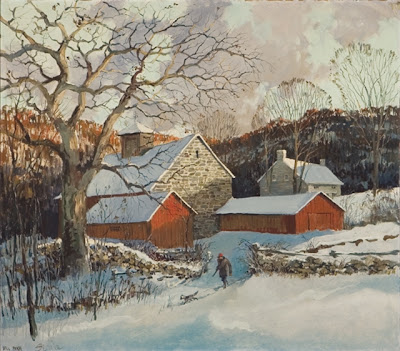 Wonderful post! I'm sitting by the wood stove now as I write this and agree that the hearth does indeed warm the soul.

Hi Herrick,
Dr James Mauch wrote a beautiful biography of Eric Sloane. It is not cheap, but it is a large book with many color paintings and well worth the price.
http://www.ericsloane-awareness.com/order.htm

Thank you for sharing.