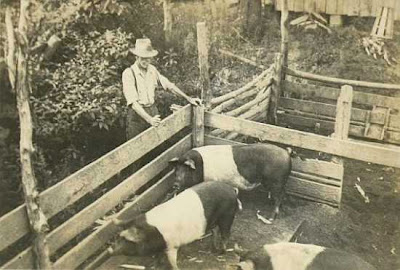 -1853-
Parsnips for Hogs
Parsnips appear to be nearly the only root good for swine in an uncooked state. Put beets, ruta-bagas, carrots and parsnips, before them, and the question will be soon settled which they like best, and consequently which is best for them—the parsnip being wholly devoured before the others are touched.
[Thomas’s Farmer's Almanac]
-1877-
Management of Swine
Notwithstanding the command in the law of Moses against eating swine’s flesh, and in spite of the learned doctors of the day, who warn us against uncooked pork, with horrible accounts of diseases entailed by careless cooking of it, most thrifty farmers find their account in keeping a few pigs; and will continue to do so until the world is a good deal nearer the millennium than at present. There is no reason to believe that well-cooked pork is unwholesome when taken in reasonable quantities, and not too constantly, by active workingmen. It is probably not well adapted to feed children and people who live much within doors.
Moreover the pig is made by the thrifty farmer, not, perhaps, to “pay rent,” like the Irish pig, for our farmers generally have no rent to pay, but he is made to work for his living, by working up weeds, potato tops, &c., into good manure; and his living will cost little if fed, as he should be chiefly in New England, on waste products—the swill, the refuse of dairies and cheese factories, of starch factories and slaughter-houses. For the western farmer can pack ten barrels of corn into one barrel of pork, and save freight by sending us his pork; so that, although feeding grain to hogs is generally profitable at the west, it seldom is at the east, except to fatten and finish off animals grown on cheaper fodder
[Thomas’s Farmer's Almanac]
-1880-
Enhancing the Pork Price
It is astonishing how apparently trifling changes in methods will influence sales and enhance prices. Farmer A raises pork; his hogs are kept in the old slovenly way, fed on garbage, or whatever the animal will eat. Farmer B also raises pork, but his hogs are well cared for; the pens are clean, and a bed of straw is supplied for quiet repose. Sunlight and air are admitted freely to the pens, and also plenty of clear water. During the fattening they are fed on good, sound meal and shorts, with skim milk. Farmer A finds a slow market for his pork, at the present time, at five or six cents per pound; while B cannot supply the demand for his at fifteen cents a pound.
[Maine Farmer's Almanac]
1883
The Economical Pig
The pig is not a very popular animal on our eastern farms, but it is the most economical meat-making machine we have. The stomach of an ox or a sheep is very much larger in proportion to live weight than that of the pig, while the proportion of intestine is greater in the pig than in the sheep or the ox. So these latter, as ruminants generally, are best fitted to deal with food that requires long digestion, while the pig assimilates food  much more rapidly. So the pig increases in weight far more rapidly than either the sheep or the ox, and not only is the rate of increase more rapid, but this increase is far greater in proportion to the food taken. To be sure his food is usually more digestible, but his capacity for assimilation is far greater and hence the more rapid increase.
[Thomas’s Farmer's Almanac]

We don't have much selenium in our soil here and so I'm going to plant a bunch of parsnips for our cattle and goats. I've read that parsnips have a higher level of selenium than most other vegetables. I was wondering...can you find anything on how farmers used to get minerals into their animals? Did they buy it from the feedstore? Were there certain vegetables and grains that would take care of their needs?