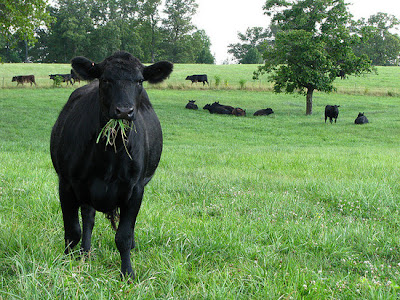 As to rapid fattening, study the habits and requirements of fattening stock. All animals, when at liberty, take considerable exercise.  Hence it is evident that a box stall, or “pen," is better than to tie by the neck or in stanchions.  Cattle at pasture eat often, and take comparatively little rest except at night.  From this it would appear that frequent feedings-- that is, at least three or four times a day-- are better for fattening cattle than larger quantities at longer intervals.

Ease, warmth, quiet, and comfort are quite indispensable to the rapid accumulation of fat.  Hence pens out of the sight of store cattle, or well-sheltered sheds, well littered, removed from any disturbance from any operations which may be going on about the premises and which might distract the animal, are important.   Fattening cattle must be treated with great gentleness and familiarity.  All domestic animals are wonderfully sensitive to human kindness, and none more so than fattening cattle.  Card or brush them every day.  It promotes rapid progress in taking on fat.  Rest and repose being of the utmost importance, careful attention to the litter is essential.  A good, soft comfortable bed is almost an essential requisite.  It is of little use to give the best and richest of food if the bed is hard and uncomfortable.  The progress will be unsatisfactory.  A soft bed tempts the creature to lie down more of the time.  In feeding, or attendance of any kind , be regular in time, prompt and quick, so that the animal may, as soon as possible, be left to undisturbed repose.  Never expose a fattening beast to wet, or cold, stormy weather.

As to food, an infinite variety presents itself for consideration, but with us Indian corn meal, ground fine, will form the basis, as being most available.  Still its is desirable to study change, both to promote the health and to stimulate the appetite.  For a full grown ox, two bushels of turnips, sliced up, per day, with ten or twelve pounds of good meal, or say five pounds of linseed meal and three pounds of Indian meal, and as much good hay as the animal will eat, is none too much.  A scanty allowance of water should be given.  If you are disposed to take a little pains, the hay may be run through a hay-cutter, put into a box with a tight cover, the meal sprinkled over it, and scalding hot water poured on, when it should be covered up, and may stand for hours.  If it begins to ferment, no matter.  It is better.  If you have plenty of caraway seed, you may add a little of that to the meal to advantage.  if the animal seems to get cloyed or sick of one kind of food, try another.  Oatmeal is a good change, and shorts may be resorted to occasionally.

Of the roots, feed the round turnips first then the Swedes, or ruta-bagas, and the mangolds last.  If you have such a box as I mentioned, you can make a layer of six inches of cut hay, packed down solid, and then a layer of cut roots, say two inches thick, and on the roots, the meal may be put; if in a boiling condition, all the better; and so on, in similar alternate layers, till the box is full.  Stir it up a little, and pour on a little hot water, and cover up, an let it stand, say twenty-four hours.  The roots will be cooked in this time.  After the first few days the animal will devour this mixture with the utmost greediness, even if the hay is not of the best quality.  For a medium sized animal six pounds of meal will do, and one bushel of roots; and it is better to begin with four pounds of meal, and gradually increase the quantity.  Linseed and Indian meal mixed is better than either alone.  Some straw may be used if the mixture is made as suggested above.  The roots must be made quite clean, or they will cause the animal to scour.  If you can get hold of some bean meal, it is excellent, especially for a change.
[Thomas's Farmer's Almanac]

I have no experience at raising cattle. However, I think it was customary to raise "meat cows" to a certain age on pasture, then bring them in from the pasture and fatten them up with a special diet for a season of time before butchering. That would seem to be what this old article on fattening is about.

Is this still customary on farms? Perhaps some of you who know more about this can provide some perspective?

And can anyone explain "store cattle?"

I typically post Agrarian Nation on Monday mornings but was unable to do so today because we lost our power last night—as a result of a spring snow storm. I've just posted it at around 4:15 pm.

Being without electricity was a little taste of what mornings were like in the Agrarian Nation. The power outage was no real problem (we're pretty much prepared to deal with life without electricity if need be) but I sure did miss getting on the internet first thing in the morning!

We've had some strange weather, haven't we? I thought you were just busy this morning, but I didn't think of a power outage. Here in the Niagara region, they were forecasting 2-4 inches, but we only had rain and some wet snow that melted upon contact with the ground.

I found this definition for "store cattle": Store Cattle - animals for beef which have been reared on one or more farms, and then are sold, either to dealers or other farmers. They are brought for finishing, normally well-grown animals of up to two years of age.

And this: "Store cattle: a lean animal sold to be fattened by a specialised producer

Whereas the other categories mentioned above concerned animals which are sold for slaughter, store cattle are a distinctive product of the suckler herd, sold after weaning and then fattened by a different producer (a fattener), in order to produce young bulls (the males) and beef heifers (the females).

Store cattle are thus calves from a suckler breed aged 6 to 8 months. These calves are reared at foot of dam until they attain a weight of about 300 kg at weaning, when they are then sorted into different categories:
> the best females, which are purebred and of good breeding value, are kept for breeding, similarly, a few males may be kept for breeding,
> the remaining store cattle (males and females) are sent for fattening (on the same farm, or more usually to a feed lot). These are the cow-calf producer’s basic products, which are then sold to fatteners".

Greatly simplified (and using the terms I'm sorta familiar with), a cow-calf producer will sell a weaned calf (approx. 400-600 lb.). The weaned calf will be put on pasture as a "stocker" to put on weight until he is sold as a "feeder". The time spent in the stocker phase varies, it can be as short as gaining 100 lbs. to waiting until he hits 900-1000 lb.

As a feeder, he usually goes to the feedlot where he is fed until he is slaughtered.

"Store cattle" would be the same as a "stocker".