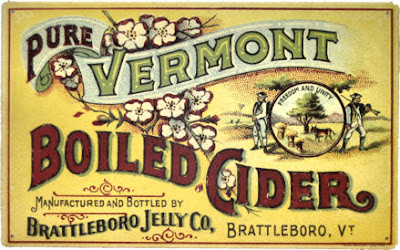 Today’s Agrarian Nation excerpt is a real gem. It comes from the February 25, 1875 edition of “The Cultivator & Country Gentleman” a popular weekly agricultural newspaper of the 1800’s. I own several, bound, yearly volumes of the oversize periodical and am slowly making my way through them, looking for tidbits of interesting information, just like this.....

To The Editors of The Country Gentleman—The following is from an old book published by B. Franklin and D. Hall in 1748, at Philadelphia. At this time, when there is such a superabundance of apples, it may be suggestive, as well as interesting for its antiquity. H.B.O. Whitinsville, Mass.

A new sort of Melasses made of Apples; the Account communicated to the Royal Society, by Paul Dudley, Esq; of New England, and published in the Philosophical Transactions, Numb 374.

The apple that produces the Melasses is a Summer Sweeting of a middling size, pleasant to the Taste and full of Juice, so that 7 Bushels will make a Barrel of Cyder. The manner of making it is thus; you must grind and press the Apples, and then take their Juice and boil it in a Copper till three Quarters of it is wasted, which will be done in about 6 Hours gently boiling, and by that Time it comes to be of the Sweetness and Consistency of Melasses.

Some of our People scum the Cyder as it boils, others do not, and yet there seems to be no great Difference in the Goodness.

This new Melasses answers all the Ends of that made by the sweet Cane imported from beyond [the] Sea. It serves not only for Food and Brewing, but is of great Use also in preserving of Cyder; two Quarts of it put into a Barrel of rack’d Cyder will both preserve, and give it a very agreeable Colour.

The Apple Melasses was discovered a few Years since, by a Gentleman of my Asquaintance, at Woodstock, in this Province, a Town remote from the Sea, and where the West-India Melasses is dear and scarce; he ingeneously confesses the Discovery was pure accidental, but ever since he has supplied his Family with Melasses out of his orchard, and his neighbours also now do the like, to their great Advantage. Our country farmers run much upon planting Orchards with these sort of Sweetings, for fatening their Swine, and assure me it makes the best Sort of Pork. And I know the Cyder made of them to be better than that of other Fruit, for Taste, Coulour and keeping.

The "Melasses" (Molasses) spoken of in today's excerpt is what became known as boiled cider syrup, and was once a very popular item in the Northeastern U.S. In addition to making hard cider and cider vinegar, making boiled cider syrup was a way of preserving the apple harvest without refrigeration. Another way of preserving the harvest was to make pure cider jelly. Apples are full of pectin and if you boil cider to just the right point, pour it in a jar and cap it, the cider will jell. No sugar is added. It's nothing but apple, and by all accounts it is delectable.